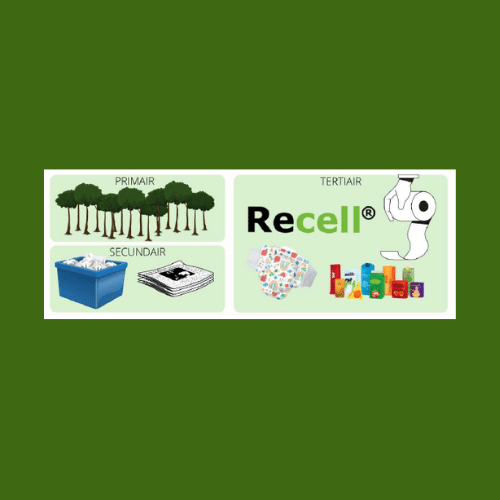 The how and why of tertiary cellulose 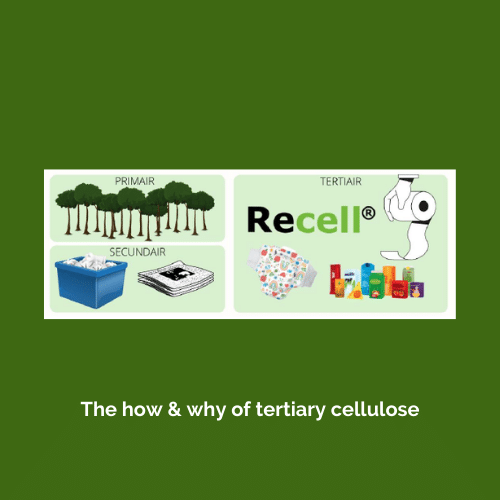 Count to three and win the most!

Tertiary: according to the Collins English Dictionary, the word tertiary means: third in order, third in importance. You will not yet find ‘tertiary cellulose’ in the dictionary. So, some explanation may be in order. What are the differences between primary, secondary and tertiary cellulose? It is clear that tertiary cellulose comes first at Recell. But what exactly is tertiary cellulose? Where does it come from? What can you do with it? More importantly, what is there to gain with it? For anyone who can count to three…

But first things first: cellulose, what is that again? The main component of the cell walls of plants and trees consists of cellulose. It is the most abundant biological polymer on Earth. In short, a polymer is a chemical compound with molecules bound together in long, repeating chains. Because of their structure, polymers have unique properties that we can adapt for different applications. Polymers are both manufactured and naturally occurring. In the latter case, these are biopolymers produced by the cells of living organisms.

When talking about primary cellulose, we mean cellulose from a natural (primary) source, such as trees and plants and a number of algae species. Primary cellulose is an important raw material for the paper industry. The wood is stripped of lignin and hemicellulose, after which cellulose pulp remains for the production of, for example, paper. So many trees are cut down to make paper. In addition, substantial amounts of water and energy are needed to make the pulp from the wood usable for the paper industry. And that is harmful to the environment.

Used paper still has a high residual value if we recycle it. In the Netherlands, we are the European frontrunner in paper recycling: about 2,500,000 tonnes of paper and cardboard (almost 90%) are collected and reused (source: St. Papierrecycling Nederland). Recycled paper is the secondary cellulose source.

However, there is an end to the number of times you can make new paper or cardboard from waste paper. After that, it is no longer suitable as a raw material for paper and even the newspaper can no longer be printed on it. This ‘exhausted’ recycled paper is now a residual flow, until recently only good for the incinerator.

The part of the paper that we cannot or will not recycle again becomes waste. It ends up in a landfill or it is incinerated. Apart from recycled paper, you can also think of diapers, toilet paper, tissues, drink cartons and (parts of) building materials. However, these residual flows still contain substantial amounts of cellulose, which we refer to as ‘tertiary’.

The numbers tell the tale

With RecellⓇ we can replace both primary and secondary cellulose. As a result, more cellulose remains in the chain for a longer period of time. In this way, we save on raw materials and reduce CO2 emissions. How much CO2 do we save? As a rule of thumb: 1 tonne of RecellⓇ saves 2 tonnes of CO2. We can calculate what this means for our customers with a so-called life cycle analysis (LCA). This is a method used worldwide to determine the environmental performance of products (e.g.), from raw materials to waste processing.

There’s no such thing as waste

Recell contributes to a circular economy. An economy in which we make new and clean raw materials from waste. Because many residual flows do indeed still represent a value. At Recell, we recover cellulose from various cellulosic residual flows using special techniques. These may, for example, come from municipal waste, from the (recycling) industry and from sewage treatment plants. Or from the part of the old paper that cannot be recycled (again). We process this tertiary cellulose into valuable raw materials for a growing number of applications in the construction and infrastructure sector, in biocomposites and in the chemical sector.

Primary, secondary, tertiary. From ‘most important’ to ‘least important’. The reverse is true for cellulose. For if you can count to three, you win the most!

Would you like more information or would you like to sit down with one of our people? Fill in the contact form. We are happy to think along with you!