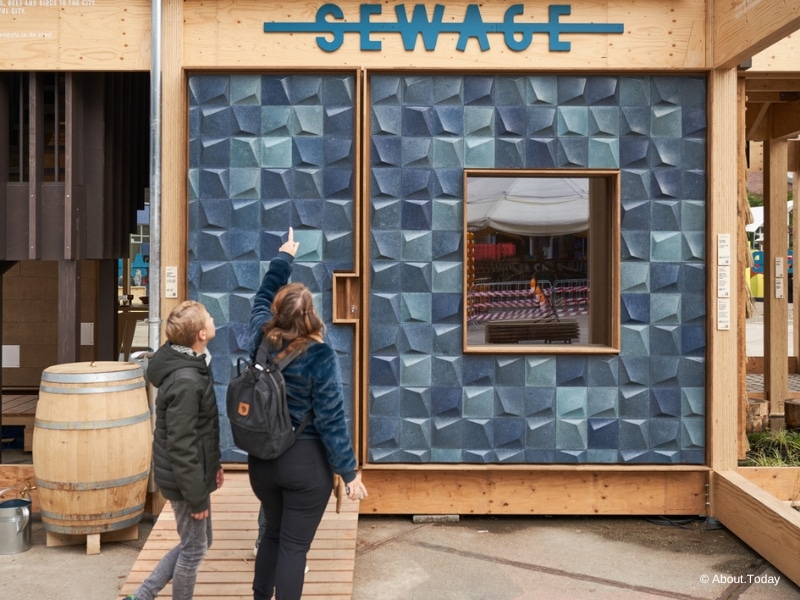 “Recell is very interesting from a circularity perspective”

At Recell, we extract unused cellulose from complex waste streams and turn it into raw material. For producing companies, this new generation of cellulose is a valuable ingredient to create sustainable, useful and beautiful products. Additionally, Recell® cellulose has a significant benefit to reducing a product’s carbon footprint. This makes it a very interesting raw material for many product developers. NPSP, for example, used it to develop gorgeous biocomposite facade panels. We had a talk with NPSP director Mark Lepelaar.

Mark Lepelaar has been around in the world of biocomposites for a few years now. “I once studied industrial design, that’s where I learned about new concepts, like the Senseo machine.” He then ended up as a consultant for renewable energy and energy conservation until it was time to start making sustainable products himself. “The pioneering, that’s what I enjoy doing. And especially pioneering with something that has social relevance, something that makes the world a little bit better.”

Mark’s pioneering spirit also underpins the foundation of NPSP. The company started small and initially developed technically high quality and sustainable products. The demand for biobased products grew. Then came the demand for ‘residual stream-based’ biocomposites. “It didn’t just have to be ‘natural’, because even for that you need resources that have to be grown. So, we continued to develop new materials. I am aware that sometimes things move very slowly but that was the same with solar energy 25 years ago. And now you see that when the sun breaks through, the price of electricity goes down…”

NPSP grew substantially and then decided to go back to basics, saying goodbye to part of the in-house production. They now outsource this to companies trained by them. “In the beginning we were the only ‘nutcase’ working with biocomposites but now many parties have joined us, in the Netherlands and internationally. You see a kind of flywheel effect.”

Movement in the market

“I don’t think you can develop a market on your own. You need more parties for that. Large multinationals will never incorporate a new product if there is only one relatively small supplier. The same goes for government contracting agencies: if there is only one provider of a product, they don’t comply with European procurement rules.” Mark observes the B2B-market is in motion but thinks that for many people biocomposites are not top of mind. “Many want a nice car. They think the color and speed are important and hardly consider the materials the car is made of!” Yet awareness is growing. “In housing construction, you can already see it: wood is better than concrete, differences in CO2, the nitrogen statement…. more and more people are reading about the matter.”

NPSP developed the Be.e, a scooter made of biocomposite

The blue facade with Recell as one of the ingredients

The materials NPSP develops for construction – such as the beautiful Nabasco 8010 cladding tiles – meet the fire safety requirements and are basically low-maintenance. “We can make our biocomposites super strong and super light, such as high-end parts for solar racing boats. We also make biocomposites that are biodegradable, such as temporary nature restoration products or sound-absorbing interior panels.”

Recell as a raw material for building material

In Nabasco 8010 facade tiles, Recell® is used as the fiber component, but fibers derived from reeds or textiles can also be used. In addition, the biocomposite consists of filler and binder. Mark: “For these composites, we need stiff fibers, which are strong and rigid. The choice of fiber is also determined by esthetics. Reed gives a brown speck, Recell® is a much finer fiber, resulting in a much smoother appearance.” Different fibers can also be combined in one product. For instance, in the blue tiles that adorn the facade of The Exploded View Beyond Building, among others – on display at Dutch Design Week and Floriade in 2022 – Recell® and reed are combined. “Many people like them”, he says.

Other colors are also possible. “For all the colors you find in the Rijksmuseum there is a biobased pigment, as long as the artwork is old enough,” says Mark with a laugh. Madder is such an ancient dye. As early as 1,500 BC the root of this plant was used to dye textiles in a red color.

The market for biocomposites definitely offers room to grow, Mark thinks. “Recell® is very interesting from the circularity point of view. It is a biobased fiber that has already fulfilled several functions.” In terms of price, biocomposite cannot yet beat other products because of its small-scale production. “That’s the economy of scales. A biocomposite with Recell® doesn’t have to be expensive because the material comes partly from a waste stream. As long as you produce on a large scale and efficiently enough and have sufficient offtake.”

According to Mark Lepelaar, you really have to look closely at the products you end up making with it. “That the textile of a sweater wears out sooner than that of another sweater is not so bad. But if the brakes on your car don’t work properly, you do have a problem! So, you must continuously conduct quality tests.” Quality testing is part of Recell’s production process, so that it is always clear for which material or product a batch of Recell® fibers is suitable.

Price is relative, Mark believes. “People may perceive it’s expensive but a Mercedes is also a more costly way to get from A to B and yet the brand has a right to exist. Here too the value for money is in balance. We are now also exploring 3D molded facades. Because hardly anyone can do that, and we can. It is biobased and 3D modeled, which gives people more added value. And that added value is really not just in the story, you see it too!”

At NPSP products are pressed, not printed. “We make a kind of dough from filler, resin and fiber. That goes into a mold and then we press under very high pressure, 80-100 bar (1 million kilogram of press force per m2). We therefore don’t make products of this kind of biocomposite with a large surface area. You would need huge machines for that.” These are long-life products, 25-30 years it will last anyway, according to Mark. When a product from NPSP eventually reaches the end of its useful life, it can be grinded and then serve as a filler for new products.

For the construction industry the facade panels are a sustainable and aesthetically pleasing alternative to wooden and ceramic cladding. Do you want to find out more about the possibilities of Recell® as a raw material for biocomposite building materials? Then take a look here.